The World of Neptos is a fantastical planet on the mortal plane of existence, where magic is as much a matter of the fabric of reality as is material physics.

The world is largely dominated by vast trackless oceans with only two known continents, Thytika and Sizwe.

Thytika and Sizwe are inhabited by many races including humans, elves, dwarves, hobgoblins, goblins, orcs, giants, and dragons, amongst some more obscure and less numerous sentient beings.

The trackless oceans are made up of virtual bottomless trenches, inhabited by Kraken and other monstrous sea ferrying creatures that make it all but impossible to traverse by sea ferrying ships.

Great Storms and tempests continually surge above the ocean making flight over the ocean equally treacherous for those that possess that means of travel.

Only the mightiest of dragons and powerful individuals dare to venture into its depths with any hope of survival and even some of those never return.

What lies on the other side of the boundless oceans is only known to the most powerful beings in the lands and they keep that knowledge secret. 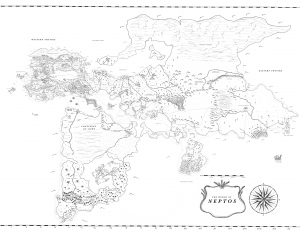