Sanctuary is a settlement located on the northern banks of the Clear Water River, bordering on the untamed Wild Moor of the frontier.

It was established by a group of adventurers less than a generation ago and has grown into a small fortified town with an unusual composition of citizens.

While mostly populated by humans, Sanctuary is home to many half-orcs and even a small number of full-bloods and goblins.

Sanctuary attracts outcasts and “monsters” that want to either escape the trappings of their races’ barbaric cultures or live without the prejudice of other races, and enjoy a more civilized existence.

It enjoys the normal laws you would expect in any other frontier settlement. Most legal matters are settled by the militia shift commanders acting as magistrates, with more severe crimes handled by the small council of town leaders.

For minor disputes, parties can settle their differences via honorable unarmed combat if consent is given by both parties. This is a fairly common way to resolve differences among the Orc and half Orc residents.

Outside the town’s fortified walls for a few miles to the west exists a number of farmsteads, hamlets, and fruit orchards that provide for much of the small town’s needs.

The construction of Sanctuary and support of its membership within the Free Cities’ Coalition is very controversial. The city of  Fairhaven is the largest sponsor of the town’s membership into the coalition, having absolute faith in the vision of the town’s founder. Lord Persus, a Paladin of Helios,  is a mysterious yet well-respected hero amongst the city-states.

Sanctuary is seen as an ambitious experiment (some consider it downright foolish) to pacify the Wild Moor or at least contain the “monstrous” elements within its domain to protect the trade route known as the Wild Run (Fairhaven to Rivermouth) as well as improve the overall security of the Free Coast.

Amberton is one such member of the coalition that is under the boot of an advanced hobgoblin outpost that extorts the town for large amounts of goods, under threat of military action.

Sanctuary is trying to prove its worth to the coalition by protecting and eliminating this hobgoblin threat. Its full membership into the coalition is dependent on the success of its mission.

Sanctuary is protected by thick crenelated walls of dwarven construction. Dark grey polished to impede any attempt to climb, and each block fitted precisely with its neighbor to create a seamless rise fifty foot in height. A narrow channel diverting water from the river fills the moat surrounding the town’s walls.

A massive gatehouse with twin towers hunkered on either side of the arched opening, serves as the main gate to the town.

The town has a strong militia presence. All citizens are required to serve at least one year within its ranks upon reaching adulthood. 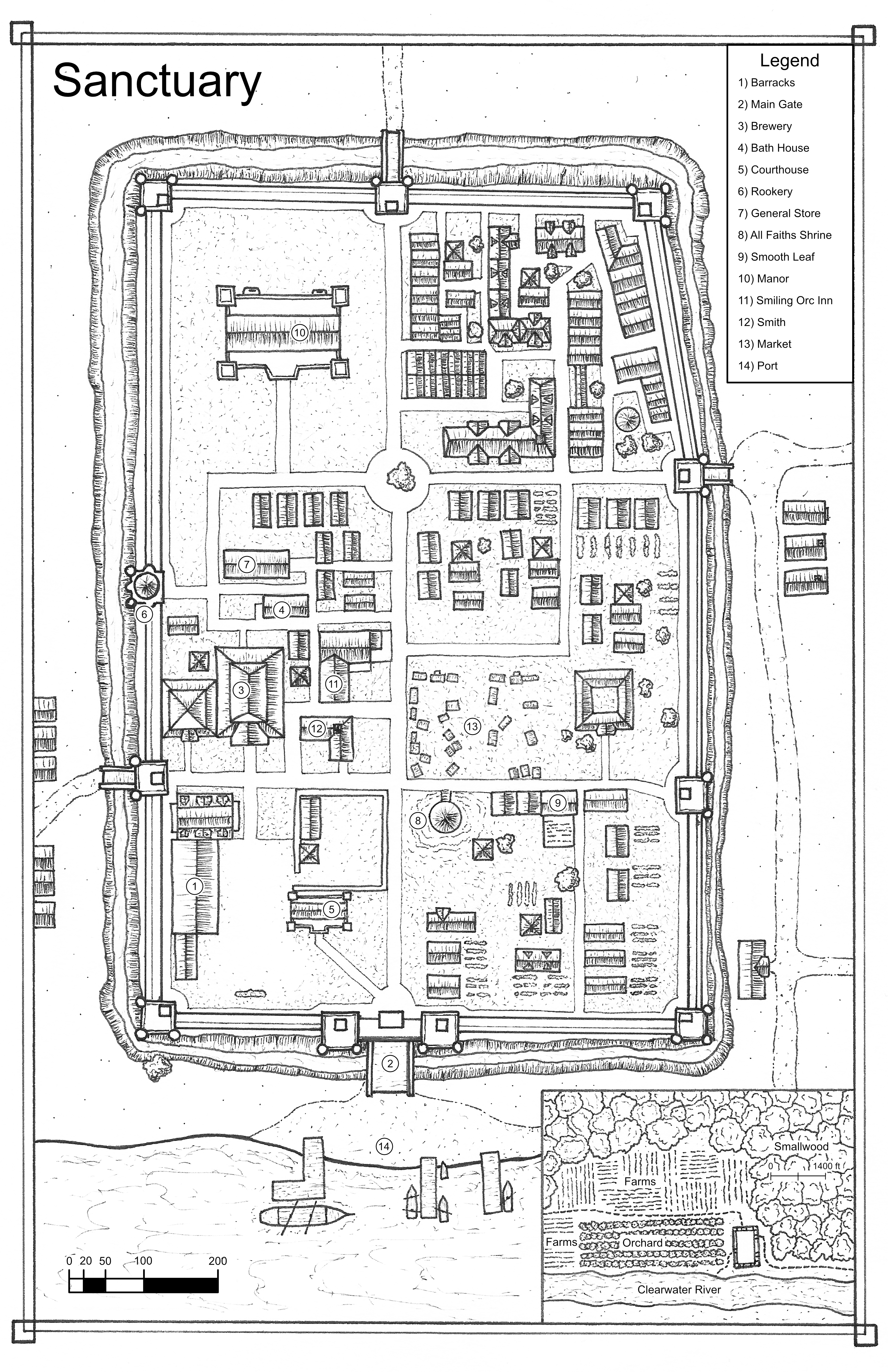