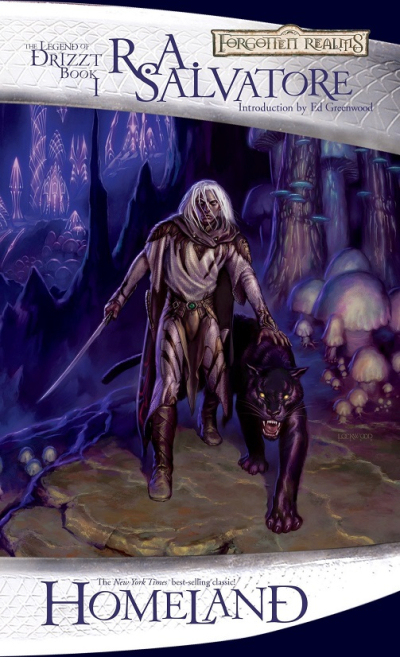 R.A Salvatore is perhaps the most popular D&D author of all time, having penned the much-loved tales of the Legendary Drizzt series.

He stunned D&D enthusiasts with the much-loved Icewind Dale Trilogy and its first book The Crystal Shard in 1988. However immediately after finishing the trilogy, Salvatore published a  prequel Trilogy.  The Dark Elf Trilogy. To this day fans recommend beginning the epic series (that spans over 30 books) with the Dark Elf Trilogy, and its first book Homeland, instead of following the published order.

Homeland (and the bulk of Salvatore’s series) is centered on the main protagonist Drizzt do’urden, a Drow (Dark Elf) warrior/ranger. Drizzt is born in the magnificent yet equally cruel Underdark city of Menzoberranzan.

The Underdark is one of the harshest environments in the Forgotten Realms setting. It is deep beneath the earth spanning vast territories interconnected by tunnels and caverns teaming with all manner of dangerous and evil beings. Only the strongest of sentient creatures have any hope of surviving let alone thriving, and the  Drow are amongst the most dominant peoples within its boundaries.

Menzoberranzan is not the largest Drow city in the Underdark, but it is almost unmatched in its evil. It is ruled by a Matriarchal Theocracy dedicated to the Spider Queen Lolth,  (the Drow Demon Goddess of  Cruelty and Chaos). It is a culture where males are considered second-class citizens and only the most skilled or powerful men ever earn respect.

Homeland is a surprisingly deep and thought-provoking tale of good vs evil in a world where tropes surrounding races are common. While there is no doubting the evil and cruelty of Drow society, Drizzt’s existence challenges the classic notions of innate evil as he questions his nature and place in the world.

Born into a relatively powerful and ambitious noble house, Drizzt quickly establishes himself as a near peerless warrior from a very young age earning a measure of respect from his female relatives. But it quickly becomes apparent that he is very different from most Drow as he struggles to hide his contempt and disgust for his people’s ways.

Homeland and the Drizzt series is a must-read for both existing and new fans of the D&D fantasy genre.