10 Aug Variety is the Spice of Life, so Let’s Get Into the Sword Coast Map!

Posted at 09:56h in Maps by Stav Saristavros 0 Comments
0 Likes

The Sword Coast is a region in the Dungeons & Dragons Forgotten Realms campaign setting.

It is a portion of the northwestern coast of Faerün, and spans a thousand miles (1,600 km!) between the city-state of Baldur’s Gate in the south and the city of Neverwinter to the north. However, it is commonly accepted that the Sword Coast extends beyond Neverwinter all the way up to Icewind Dale, the Arctic and northernmost region of the Sword Coast.

The metropolises of Waterdeep and Baldur’s Gate are two largest cities on the Sword Coast, dominating the trade and political influence of the region.

Because it can be a somewhat lawless place, with a frontier feel, it’s a meeting place for all races, classes, and alignments, and has been the setting for many adventures, as well as the setting for a seperate book put out by Wizards, “Sword Coast Adventurer’s Guide.”

What is the biggest city on the Sword Coast?

The citizens of Waterdeep might debate this point, but Baldur’s Gate is the biggest city there; a huge port metropolis!

The Gate is the absolute hub of trade for the Sword Coast. Bustling and productive, people of all kinds coming and going, goods being imported and exported, Baldur’s Gate is The Big City for everyone around. In addition to being the most populous city on the Coast, it is one of the most powerful cities in all of Faerün.

Their strong peace-keeping force known as the Watch, along with the presence of the powerful Flaming Fists mercenary company, keep the city generally peaceful and safe.

This inherent sense of security is what allows the Gate to keep a tolerant and welcoming attitude towards outsiders, like you, whether you are a wealthy merchant, poor refugee or, as it historically attracted, a less-scrupulous individual such as a pirate or smuggler.

All are welcome, but watch yourself because the Watch watches you!

There is a ton to say about Baldur’s Gate, and maybe you’ll get a whole write up about it later, but for now I’ll leave you with this: it is divided into four main sections. The Upper City is the walled region to the north.

The Lower City is the portion between the Old Wall and the river, the Chionthar.

The Outer City is the shantytown that rose up along the roads to the city and around Dusthawk Hill.

The Underground is the sprawling interconnecting warrens of dank cellars, twisting corridors, and cramped tunnels that stretch beneath nearly every corner of the Upper City region.

There is a huge variety of locations just within this one city, and each one will give you opportunities and challenges.

Waterdeep, sometimes referred to as The City of Splendors or The Crown of the North, is a close second,  and I could go on and on about it, but the things to note are:

The name of “Waterdeep” was originally used by the sea captains docking at the port to trade, a moniker that originated from the city’s phenomenal natural deep-water harbor, a must-have to do major trade.

The city is governed by an anonymous council of leaders called the Lords of Waterdeep. One of these Lords acts as the “Open Lord” and face of the ruling council. As the Lords are able to govern the city with anonymity, thieves and other ne’er-do-wells could hardly trust their partners-in-crime.

Since the Lords’ identities are secret, criminals do not know if trusted partners are truly on their side or not.

This is not to say that there were no thieves or crime in the streets of Waterdeep. With trade comes crime, and you cannot go to Waterdeep without considering the underbelly and how you might be interacting with the last official thieves’ guild.

Crime there has been mostly random and dispersed, with no one leader or organization to take command.

One attempt was made by the crime lord known as Xanathar, a beholder with a well developed secret network of spies. This network was savaged and Xanathar defeated through the actions of bold adventuring companies at the command of the Lords of Waterdeep.

However, rumours are once again circulating of Xanathar’s return and his crime organisation is growing in influence to assume the mantle as Waterdeep’s most prominent criminal organization.

As a side note: the board game put out by Wizards, “The Lords of Waterdeep” is really fun!

If you have a social game group who wants to try something different, likes to use resource management in games, and is up for learning something new, have a look at Lords of Waterdeep. It plays best with 5, but is for 2-5 players.

To the west of the Sword Coast lies the Moonshae Isles. The six main islands in this area are Norland, Moray, Omans Isle, Gwynneth, Snowdown, and Alaron, each with their own cities and sights.

Waterdeep is about 550 miles (about 900 km!) up the coast from Baldur’s Gate, as the crow flies. Waterdeep is under the Sword Mountains themselves.

If you’re heading North from the Gate, you might want to detour to take the road instead of the coast, as you might not want to have to travel through Trollbark Forest. It will be a longer distance, but probably a shorter stay in the hospital; take the Trade Way, it’s the safer way.

Take a look at this closeup between The Gate and Waterdeep and you’ll see: 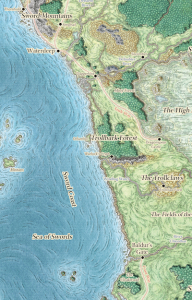 But wait there’s more to see on the Sword Coast!

The Sword Coast is an immense region of too many sites of significance to mention, but we will do our best to give some Lonely Planet Highlights to get you started.

Bowshot, a small village, is just a “bow’s shot” away from the Misty Forest. It is built around a series of caverns that are believed to connect further deep beneath Faerün. A spelunker’s paradise, make sure you plan ahead if you’re going underground! Cave adventure anyone?

Candlekeep is a coastal citadel of learning, and is the former sanctuary of the famous oracle known as Alaundo. The order of monks that calls it home, The Avowed, keep visitors to a minimum while offering the wisdom and learning of its libraries, albeit at a steep cost.

This is Ivory Tower to the max! Those scholars, with their book learning, keeping their wisdom all to themselves… I’m sure you will find a helpful librarian here if you need one.

Daggerford is a walled duchy that is surrounded by a number of farming villages. Although it is ruled by a lone head of state, its daily operations are overseen by its Council of Guilds.

If you want fresh food supplies and you’re in the area, give Daggerford a visit and see what it has to offer.

Friendly Arm Inn is a walled keep and a safe refuge for travelers along the Coast Way. It houses the Temple of Wisdom, a shrine to the gnomish deity, Garl Glittergold. Certainly if you need to regroup after having a rough time, the Friendly Arm Inn will have your needs covered!

Pull up a chair, tuck into a mushroom pie with a flagon of ale, and let the bard play you some tunes to take your mind off of whatever just happened to you.

Ask some questions and see what kind of knowledge is floating around in a small place so close to the Underdark. Though if you’re in the market for a particular kind of object, Torleth’s Treasures is a shop there that specializes in oddities, curios, antiques, and junk!

On The Underdark is not just one giant cavern under Faerün, but rather, many huge networks of caverns and caves. As a result, it’s not always possible to travel from one end of the Underdark to the other.

It’s divided into several domains (8 domains) that are similar to continents of the world above. While it was possible to travel from one place to another within a domain, separate domains tend to have very few passages linking them.

So if you find yourself at The Tomb in Gillian’s Hill, be prepared to maaaybe go underground!

What races are in the Sword Coast?

All races and classes come together here! It truly is a variety of everyone under the sun. Your party can run into most anyone there.

While you’re there to explore, you could visit a store, open an account at the port, buy an antique dragon chess set, read the latest popular paper on transmutation, provide detailed information to The Watch, give thanks to whatever great community helps your quest the most, and search for available work (will you help me clear the rats out of my attic), all in the span of a single day!

You’re free to explore this vast and rich region of Faerün; hopefully you’re using your head when you’re in some of the seedier places or it might add some new scars, or even put your life in danger.

Map of the Sword Coast from Forgotten Realms

Click the map below to go straight to Wizards of the Coast for different resolution downloads! 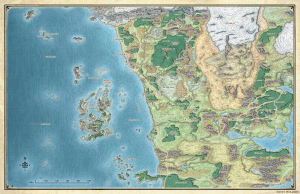 While you’re on the Sword Coast, there are tons of places to see, and trouble to get into and hopefully get out of safely.

Good luck out there adventurers, it’s a wild place!