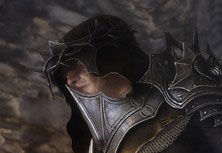 24 Aug On Compromising Your Values: Playing an Oathbreaker Paladin

Posted at 08:52h in Characters by Stav Saristavros 4 Comments
0 Likes

Paladins take oaths to help guide them along their journey. As a paladin, your interactions with the world are shaped by this oath, and filters into everything you do, an overarching tenet that colors your choices.

So what happens if you break your oath? What if you just break it once? Are you now a Big Bad Evil Paladin? What if you keep breaking it, over and over again? What if you throw it out the window and take a different kind of oath?

The path to the dark side begins here, but just because you break your oath doesn’t flick the Morality Switch; alignment can be more subtle than that!

What is an Oathbreaker?

What does it mean to take an oath?

An oath is: a solemn (usually formal) calling upon a god or ideal to bear witness to the truth of what one says, or to witness that one sincerely intends to do what one says. It is a solemn attestation of the truth or inviolability of one’s words.

Becoming a paladin involves taking vows that commit you to the cause, an active path of fighting for your beliefs. The final oath, taken when you reach 3rd level, is the culmination of all your paladin training.

Some characters with this class don’t consider themselves true paladins until they have reached 3rd level and made this oath. For others, the actual swearing of the oath is a formality, an official stamp on what has always been true in the paladin’s heart.

The extent to which you go down this path is entirely up to you. Was it just a one-time transgression? Did you do a bad job in the heat of battle, taking a single swing of your sword which went against your oath?

Or is your entire path becoming compromised? Are you feeling more and more like who you are becoming is not in line with your oath?

Breaking your oath doesn’t inherently make you evil, but it is a step down that dark road. Certainly if you are looking to play an ‘evil’ paladin, you’ll probably have broken your oath and broken it hard.

The Oathbreaker,sometimes referred to as a fallen paladin, is intended as a villainous option for Players and NPCs.

An Oathbreaker is a paladin who breaks his or her sacred oaths to pursue some dark ambition or serve an evil power. Whatever light burned in the paladin’s heart has been extinguished. Only darkness remains.

If you want to play a ‘non evil’ oathbreaker paladin then it’s best to talk to your DM to work out the mechanics of the archetype of Oathbreaker, as some of the abilities they receive are quite dark. Perhaps it might be better to select a more appropriate oath that better fits in with a non evil archetype. 5e is quite flexible with paladins and alignments, with plenty of oath options to suit your playstyle.

However, even if you do break your oath, a fallen paladin can always redeem themselves.

If you allow a player to choose the Oathbreaker option, you can later allow the paladin to atone and become a true paladin once more.

The paladin who wishes to atone must first shed his or her evil alignment and demonstrate this alignment change through words and deeds. Beware, A paladin who breaks his or her sacred oath a second time can become an oathbreaker once more, but can’t atone (DM discretion always advised).

As an Oathbreaker, you still have all the traits, abilities, and spells you did as a regular ol’ oath-keeping paladin. This includes your fighting style, divine health, divine smite, being able to heal, and casting lay on hands! 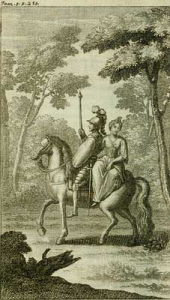 Do Oathbreaker Paladins have gods?

Is your alignment changing? Do you need to talk to a priest?

As a paladin, you probably have a god. Your oath may not necessarily be totally bound to that particular god, so it may not interfere at all with your spiritual life in relation to your deity.

However, your relationship to your god may change as you break your oath, or as you veer so sharply away from it that “your god” may no longer be “your god” and you have to switch to another…

Some classic paladin gods are Torm, Tyr, Heironeous, Paladine, Kiri-Jolith, Dol Arrah the Silver Flame, Bahamut, Athena, Re-Horakhty, and Heimdall. Check and see how your oath, and breaking that oath, lines up with some of them.

How do you become a Paladin?

When you make your D&D character, you can choose your class to be paladin. If you are playing a character who is not a paladin, talk to your D&D about converting, and what that might look like on both a story level and a logistics level.

How do you play Oathbreaker?

Knowing your character is at the core of what it will mean to you to play an oathbreaker. Understand the oath you have taken, all its ramifications, all the ways in which it can steer the direction of your life and the choices you make in all your interactions.

It isn’t always as blunt as “I will not kill the innocent” but can be more subtle, getting into the realm of “thought crime”, where your thoughts and intentions come into play.

The last pictures here are paladin character designs from the Sketch Goblin (used with permission). Any paladin can be an oathbreaker; can you spot the oathbreaker out of the three? 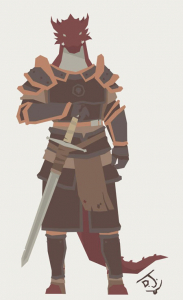 How good is Oathbreaker Paladin?

Paladins are fairly balanced, and they remain so when you break your oath! It doesn’t make you better or worse, but they do have some extra features which you can see below.

The DM’s Guide indeed does have about 3/4’s of a page on what it means to be an Oathbreaker Paladin.

It gets into the specifics (below), including listing Oathbreaker Paladin spells: hellish rebuke, inflict wounds, crown of madness, darkness animate dead, bestow curse blight, confusion contagion, dominate person. These are in addition to the normal paladin spell list you have already. 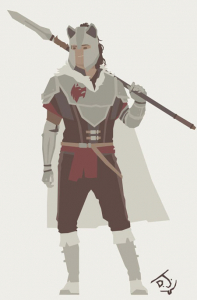 Control Undead: As an action, you target one undead creature you can see within 30 feet of you. The target must make a Wisdom saving throw. On a failed save, the target must obey your commands for the next 24 hours, or until you use this Channel Divinity option again.

An undead whose challenge rating is equal to or greater than your paladin level is immune to this effect.

Dreadful Aspect: As an action, you channel the darkest emotions and focus them into a burst of magical menace. Each creature of your choice, within sight of you, within 30 feet of you must make a Wisdom saving throw.

On a failed save, the target is frightened of you for 1 minute. If a creature frightened by this effect ends its turn more than 30 feet away from you, it can attempt another Wisdom saving throw to end the effect on it.

Aura of Hate: Starting at 7th level you, as well as any fiends and undead within 10 feet of you, gain a bonus to melee weapon damage rolls equal to your Charisma modifier (minimum of +1).

A creature can benefit from this feature from only one paladin at a time (but multiple paladins acting in tandem can cause this effect to stack). At 18th level, the range of this aura increases to 30 feet.

Dread Lord: At 20th level, you can use an action to surround yourself with an aura of gloom that lasts for 1 minute. The aura reduces any bright light in a 30-foot radius around you to dim light.

Whenever an enemy that is frightened by you starts its turn in the aura, it takes 4d10 psychic damage. Additionally, you and any creatures of your choosing in the aura are draped in a deeper shadow.

Creatures that rely on sight have disadvantage on attack rolls against creatures draped in this shadow.

While the aura lasts, you can use a bonus action on your turn to cause the shadows in the aura to attack one creature. Make a melee spell attack against the target.

If the attack hits, the target takes necrotic damage equal to 3d10 + your Charisma modifier.

After activating the aura, you can’t do so again until you finish a long rest. 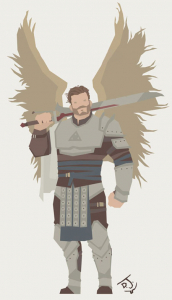 Of those three paladin characters, could you tell which was the oathbreaker? No? Exactly. If you go down a dark evil path, it may begin to show, but it also might not.

Playing on the subtle edge of this is where the juicy fun is.