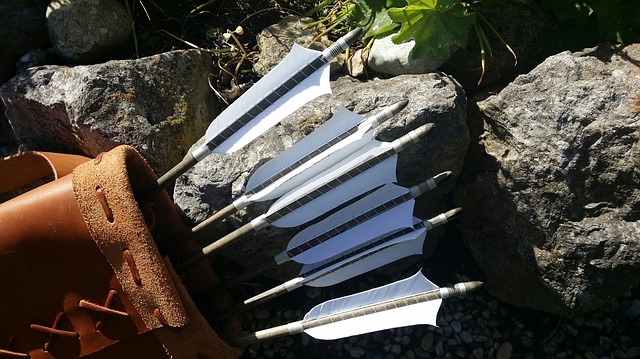 Posted at 09:49h in Races by Stav Saristavros 0 Comments
0 Likes

Eladrin: high elves and fey elves, depending on which source book you’re reading, are a great way to take your elf character up a notch for a fresh take!

Okay what is even going on with eladrin elves right now. Eladrin means WHAT exactly? The term “eladrin” can refer to a family of fey races, or to specific races or subraces in that larger family. The larger family of eladrin includes:

Eladrin originally appeared in the Dungeon Master’s Guide as an elf subrace, but it is worth mentioning that the current 5e Players Handbook only lists three elf subraces (High, Wood, and Dark). 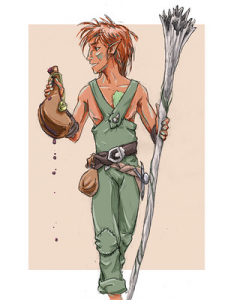 Are Eladrin Fey or humanoid? Does Eladrin count as Fey?

High Elves are graceful warriors and wizards who came from the realm of Faerie, which is also known as the Feywild, however despite their fey origins they are still humanoids, with fey ancestry like all other elves.

On the surface, eladrin look quite a bit like other elves, and you probably know what that means. Slender, pointy ears, tosses a Dwarf, you get the picture. However, eladrin are more slim, and their eyes tend to glint hints at their innate feywild magic.

It’s the link between their emotions and their appearance that really sets fey eladrin (not High Elves) apart from other elves. They are the closest to being a ‘mood stone’ subrace as you’ll get! There are broadly 4 “states” for a fey eladrin to be in, which will change your appearance.

Each state is linked to a particular feeling and one of the 4 seasons. Some eladrin will spend their entire lives in a single mode, while some will go back and forth between them as often as they change clothes.

Yes! As a fey eladrin, based on your mood and season you will have a different look.

Eladrin in the spring state tend to have green skin and hair. Their whole being exudes the vibe of growth to such an extent that flowers and plants may sprout around them. This state is linked to joyful and playful emotions, celebrations, and cheerfulness.

Eladrin in this state are often optimistic and happy, energetic and exuberant, and prone to mischief while acting naive and careless to potential dangers. Ah, springtime, when love is in the air.

Eladrin in the summer state tend to have more golden hair and skin. Their presence and aura is intimidating. This state is linked to passionate and wrathful emotions, confrontations, and anger. Eladrin in this state are often quick to anger, but motivated, and ready to act against any threat.

Eladrin in the autumn state might have red or orange hair and skin, their features mimicking the newly turned autumn leaves. This state is linked to peaceful and calming emotions, with sombre self-reflection.

Eladrin in this state are open to change, level-headed and well-meaning, and slow to act without careful consideration.

Eladrin in the winter state will have pale blue or white hair and skin, their features mimicking the frosty winter landscape. This state is linked to sad and melancholy emotions and quiet contemplation.

Eladrin in this state can be prone to bouts of angsty pouting, real Gloomy Gusses, while holding grudges, and crying frozen tears.

Can elves be Paladins D&D? What is the best class for an Eladrin elf?

As with any race, you can be any class. D&D can be min-maxed (trying to get the most bang for your buck by coordinating racial and class traits) or you can be whatever you want regardless of if it’s going to be ‘the best value’. Who’s to say your eladrin can’t be a paladin?

How long do Elves live in DND? How old can Eladrin be?

Although elves reach physical maturity at about the same time as humans, the elven understanding of adulthood goes beyond years and height; worldly experience is necessary to make an elf a full adult.

An elf typically claims adulthood, and an adult name to make the occasion, around the age of 100. Elves can live to be 750 years old.

Ask yourself how such a long lifespan might change your elf’s outlook on the world? How do you handle making non-elf friends who you will watch grow old and die? Where you are in your elf’s life will vastly change your approach to the game; an 18 year old fresh-faced baby elf is going to play completely differently from a 400 year old weathered and mature elf.

Do elves have last names DND?

Yes. Depending on the background and family history of your elf character you may want to tailor your name to fit! Or you know, make your own way in the world; if Adrie Xiloscient (surname meaning Goldpetal) wants nothing to do with plants, who’s to say that’s not part of your character? 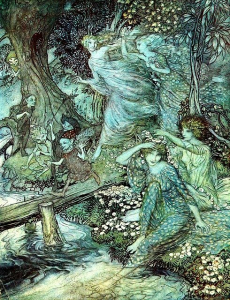 What Sourcebook is Eladrin in?

Eladrin, as in High Elves, are in the current 5e Players Handbook put out by Wizards of the Coast. You should ask your DM about certain eladrin traits, like the colour/mood changing of the fey eladrin, and what circumstances they will be available under.

Unless otherwise discussed, older variants of elves might be off the table! Check with your almighty DM, and remember, they want you to have a good time too 😉

Eladrin, as in the subrace of elves, separate from High Elves (confusing, I know), are in Mordenkainen’s Tome of Foes (also put out by Wizards of the Coast). It also details the specific traits of each of the kind of eladrin, their ‘season’ particulars.

Eladrin dwell in the verdant splendor of the Feywild. They are related to the elves found on the Material Plane, and resemble them in both their love of beauty and the value they place on personal freedom.

But where other elves can temper their wild impulses, eladrin are creatures ruled by emotion- and because of their unique magical nature, they undergo physical changes to match their changes in temperament.

The eladrin have spent centuries in the Feywild, and most of them have become fey creatures as a result. Some of them are still humanoid, similar in that respect to their other elven kin. The eladrin presented here are of the fey variety.

The magic flowing through eladrin responds to their emotional state by transforming them into different seasonal aspects, with behaviors and capabilities that change with their forms.

Some eladrin might remain in a particular aspect for years, while others run through the emotional spectrum each week.

Regardless of the aspect they express, eladrin love beauty and surround themselves with lovely things. Eladrin try to possess any objects they find striking. They might seek to own a painting, a statue, or a glittering jewel.

When they encounter people of comely form or luminous spirit, they use their magic to delight those folk or, in the case of evil eladrin, to abduct them

Regarding changing seasons for your eladrin, Mordenkainen has this to say:

When finishing a long rest, any eladrin can change their season. An eladrin might choose the season that is present in the world or perhaps the season that most closely matches the eladrin’s current emotional state.

For example, an eladrin might shift to autumn if filled with contentment, another eladrin could change to winter if plunged into sorrow, still another might be bursting with joy and become an eladrin of spring, and fury might cause an eladrin to change to summer. 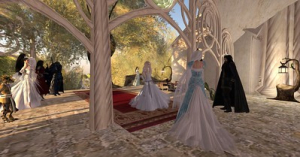 Mordenkainen goes on to talk about a special ability:

Fey Step: As a bonus action, you can magically teleport up to 30 feet to an unoccupied space you can see. Once you use this trait, you can’t do so again until you finish a short or long rest.

When you reach 3rd level, your Fey Step gains an additional effect based on your season; if the effect requires a saving throw, the DC equals 8 + your proficiency bonus + your Charisma modifier:

Remember: you can change seasons!

Also remember, if you are a High Elf, you have less need for sleep. Trance: Rather than sleep, eladrin enter a meditative state known as trance. You need to spend 4 hours in this state to gain the same benefits other races gain from taking a 6-hour extended rest.

Have fun figuring out which elf aspects to incorporate into your character! It’s neat to see so many options for playing a different take on the well-trodden elf archetype. Good luck, have fun!