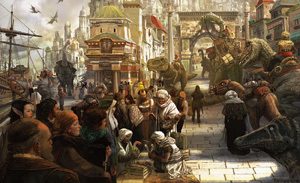 Posted at 05:31h in Characters by Stav Saristavros 0 Comments
0 Likes

This pre-made adventure campaign is designed to take your D&D party from levels 1-11, being played with the same group for months and months.

The flavor of it makes it feel different from your standard ‘paladins, dungeons, dragons, wizards, orcs’ kind of D&D, and will take you into the deepest, darkest, and deadliest jungle adventurers have ever set foot in!

Oh and did I mention there are dinosaurs? DINOSAURS YOU GUYS, all up in this.

Dare to defy death in this adventure by Wizards of the Coast for the world’s most popular roleplaying game, Dungeons & Dragons!

The talk of the streets and taverns has all been about the so-called death curse: a wasting disease afflicting everyone who’s ever been raised from the dead.

Victims grow thinner and weaker each day, slowly but steadily sliding toward the death they once denied.

When they finally succumb, they can’t be raised—and neither can anyone else, regardless of whether they’ve ever received that miracle in the past.

Temples and scholars of divine magic are at a loss to explain a curse that has affected the entire region, and possibly the entire world.

The cause is a necromantic artifact called the Soulmonger, which is located somewhere in Chult, a mysterious peninsula far to the south, ringed with mountains and choked with rainforests.

That blurb from Wizards might be enough to sell you on it, or you might have some more questions before committing to such a lengthy campaign. Especially because Annihilation is an attempt at just that: annihilating your characters in a dungeon meatgrinder.

Unless you are prepared for slow, cautious, thoughtful play in a super deadly oldschool style, this one might not be for you!

It is tricky to say how long these premade campaigns will last, and reports of various tabletop groups vary wildly! If you want to spend 6 months with this one, you can.

There is a lot to do, and if you’re playing carefully (ie trying to avoid dying in a land where there is no resurrection) you can make it last.

Is Tomb of annihilation hard?

In a word, yes. There is tons of combat that straight up will just kill you and your party if you do not find a way around it by fleeing, negotiating, or getting extremely lucky.

It is not what you might be used to, and if you don’t go in knowing that a lot of it will permanently kill you, you’re going to have a bad time.

This is a more classic-feeling D&D, where you have to be more conservative in your approach to problems, and don’t just roll for initiative at the first sign of trouble.

There are choices you have to make that can just be wrong. If you choose the wrong guide to lead you through the jungle, for instance, you can get led straight into a trap.

There are many ways to fail, and the only way to succeed is to take in as much information as you can, and pick up on the clues that will steer you in the correct course of action. 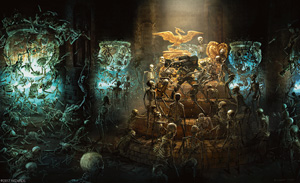 Is Tomb of annihilation the same as Tomb of Horrors?

No, but it is a sort of homage to it. There are similarities enough to say it was inspired by it, but they are different campaigns, different arcs, different dungeons.

What is Tomb of annihilation based on?

In Tomb of Horrors, you’d be given a description sort of like ‘here’s a tomb and what it looks like, what do you do?’ and then you’d proceed to die. In Tomb of Annihilation, you are given a lot more to go on.

“Here’s a bunch of characters, and all this stuff you can do, and here’s what’s going on, and here are clues telling you what will happen if you do this or that, and here is a tomb that will kill you; what do you do?” In Annihilation, you have juuust enough information to get through it.

…But only just. They had to playtest it so much because they were worried it was too hard, and traps were killing too high a percentage of players. So yes, death like in Horrors, but more clues, upping your odds of surviving Annihilation. 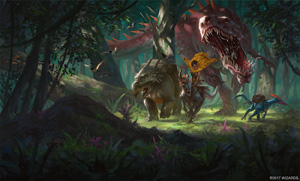 This really comes down to what kind of D&D you want to play. It’s a campaign that is very specifically geared towards a kind of playstyle, and if it’s not your jam you will not really find it enjoyable.

Annihilation is a love letter to classic D&D. It is a story that sets out to explore what you can do with the confines of a D&D campaign.

It plays to its strengths and builds on a history of previously published adventures like the Tomb of Horrors or the Hidden Shrine of Tamoachan, but it doesn’t ever fall into cringy self-indulgent nostalgia.

It incorporates elements of these classic adventures, but at the same time manages to build its own path. It’s 5th Edition at its finest, if you’re there for the different approach.

There’s a sense of adventure and danger that pervades each of the chapters. Everywhere you go there’s a cool location or a unique NPC or some turn of events that makes you excited to get in there and play.

What classes are good for Tomb of annihilation?

A balanced party is always a good idea! If you all are glass-cannon wizards you’re going to lack the versitility you might get from a more diverse set of characters, and your options are going to shrink. Same if you all roll up as tanky close-combat fighters.

You want to have some variety to let the different classes each take their own stab at helping solve whatever mortal peril you are in.

It is designed to take characters from levels 1-11, but it can take longer. You might make it to The Final Boss at level 12, and it will be just as hard; it’s not going to be an easy fight.

There are notes included for how to start the adventure at 5th or even 9th level, so it won’t be as difficult, but that’s between your party and your DM. How hard do you want this to be?

Where does the Tomb of Annihilation start?

There are five chapters in Annihilation: 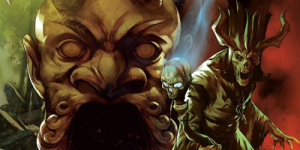 Who Should Purchase It?

If you still need a little more inspiration before you try this one, check out Matt Mercer’s 15 episode campaign Force Grey: Lost City of Omu on youtube where his players start at 6th level.