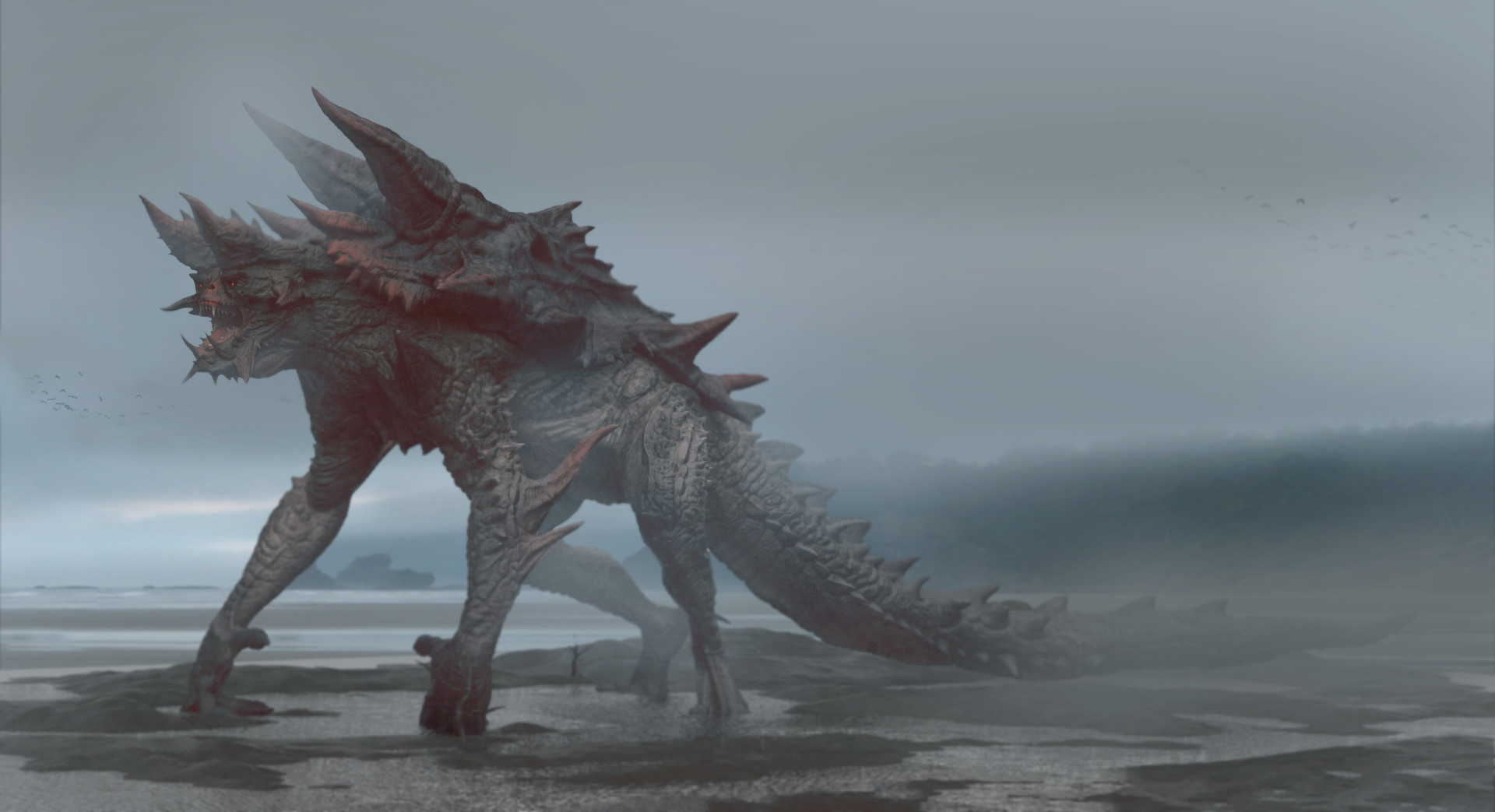 08 May Fighting the Tarrasque: Roll for initiative or Run for the hills?

Posted at 20:34h in Races by Stavros Saristavros 0 Comments
0 Likes

One of the most devastating foes any player will ever encounter in Dungeons & Dragons is the “gargantuan monstrosity” known as the tarrasque.  Those unfamiliar with it may imagine Godzilla or a kaiju from Pacific Rim and you understand the world of pain the party should be in for.

What is a tarrasque?

Possibly the most dreaded monster on the material plane, the tarrasque may be the only beast of its kind in existence. You’d think it being 50 feet tall (over 15 meters!) and 70 feet long (over 21 meters!), would let you keep track of its whereabouts, but no, you don’t know where it is.

The tarrasque has a scaly carapace, giving it natural thick armor. It walks on two legs, leaving its arms free for a devastating claw attack. It can swallow creatures whole.

Sounds like an easy TPK right? Sadly it’s not.

A tarrasque is unbelievably strong. If you want to randomize its hit points, you’re looking at rolling 33 (that’s thirty three) d20, and then adding 330. Or for shorthand, a tarrasque has 676 hit points.

This monster is a beast!

Charisma: 11 (+0) – Who needs intimidation when you can just eat everyone right?

No I don’t think I will

The tarrasque has natural damage immunities that should make you pause: a tarrasque will take NO damage from fire, poison, bludgeoning, piercing, or slashing (from non-magical attacks) sources.

We’re talking other kinds of resistance too: Legendary Resistance means that if the tarrasque fails a saving throw, it can choose to succeed instead, three times per day. Like wow where can I get some of that! Literally it’s like, oh I failed? How about no.

Magic Resistance means that the tarrasque has advantage against spells and other magical effects.

The tarrasque also has an ability called Reflective Carapace which will bounce certain spells back at the caster, so make sure your party is all on the same page as to what should and should not be considered a valid attack against this gargantuan beast. 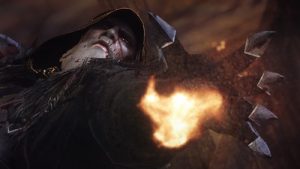 This beast has a ton of tricks up its sleeve. Its ability called Frightful Presence is absolutely savage.

When the tarrasque uses Frightful Presence (or Multiattack, which includes using Frightful Presence), the mere sight of it, or being proximal to it (within 120 feet) and knowing it’s there, is enough to cause you to make a wisdom saving throw; if you fail, you are frightened for 1 minute. 1 minute is basically a year in a battle (10 turns!). And being frightened isn’t something to mess with either- while frightened, you cannot willingly move closer to the tarrasque, and you are disadvantaged to all ability checks and attack rolls.

Think about that for a second. If you get within 120 feet of this thing and you fail that wisdom check, you spend 60 seconds, that is 10 turns, being unable to move closer to it, and being hamstrung in your attacks and checks. You can make saving throws on your turns, but the DC is pretty high. Good luck finding your courage again; your team will be counting on you.

The tarrasque makes five attacks: two with Claw, one with Bite, one with Horns, and one with Tail. It’s an absolute flurry of fury. With +19 to hit, good luck getting out of the way and each of those attacks hits like TRUCK!

The fun does not quite end there.

Have we talked about Swallow yet? Did I mention the absolute size of this monster? With its height and mass, the tarrasque has a gargantuan mouth to match. It can open wide, and swallow creatures whole. It can swallow any creature with size large or smaller; this includes you, your other party members, your horses, basilisks, cerberus, chaos drakes, seraphs… if it’s large or smaller than large, it’s going down the gullet.

What happens to you when you are swallowed by a tarrasque?

Did I mention you take 15d6 acid damage each turn you are inside? Silly me, it must have slipped my mind! 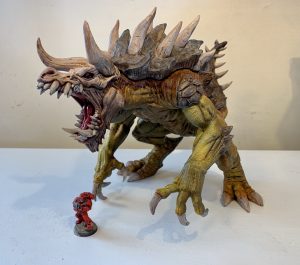 This is one busy beast. It has three extra actions, which it can take at the end of other creature’s turns, and it regains spent legendary actions at the start of its turn.

The Bad and the Ugly

By now you are wondering with all these awesome stats what is wrong with this thing?

The tarrasque is designed to be thrown against the highest level players, so it needs to be able to compete with the diverse set of tools a high level adventuring party can throw at it.

The sad reality about the tarrasque is that with some very basic tactics it becomes a trivial fight, unless a DM homebrews the creature, or heavily modifies the environment a party engages it in.

The key is, keeping your distance.

The tarrasque has no ability to launch ranged attacks and cannot fly.

Given enough ammunition and time, a 1st level character with a magic bow and the ability to fly, can defeat this monstrosity in its current form.

The simple Longbow puts you outside of the range of frightful presence and it simply cannot reach you to attack when you are 150 ft above its head.

So what do you think a 20th level party of super heroes can do to it?

A wizard can easily up-cast the  fly spell on its whole party and then…. “Can’t Touch This! Stop! Arrow Time!”

The tarrasque quite simply is too easy to “Kite” and it becomes a quite boring fight for those that exploit its obvious weakness. 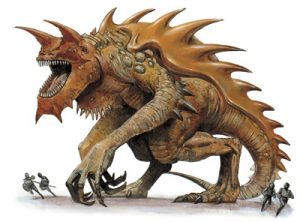 The tarrasque is supposed to be the biggest and baddest mother $!@#$ on the block!

This is not about punishing your players! This is about doing justice to this creature and in the process giving your players the most epic and memorable fight ever!

In victory, your players will have a sense of achievement and this should remain a moment they will talk about for years to come.

In defeat, it will still be a super memorable fight and do justice to the legendary status of the tarrasque.

Where do I start?

Take inspiration from previous editions. In 4th editions the tarrasque had the ability to regenerate.

This is a great ability and prevents a 1st level aarakocra from slowly grinding it down with sacred flame. (sadly it can be done)

Drop the tarrasque in a city and give your players a sense of urgency! The longer they take to kill it the more damage it does to their beloved kingdom.

Don’t be scared to give it some ranged attacks! Godzilla had a breath attack. Well that’s a great idea!

Hell, give it a Red Bull and watch it grow wings!

Don’t be scared to challenge your players. The tarrasque should be one of the most terrifying creatures you will ever throw at them.

But always remember, have fun.