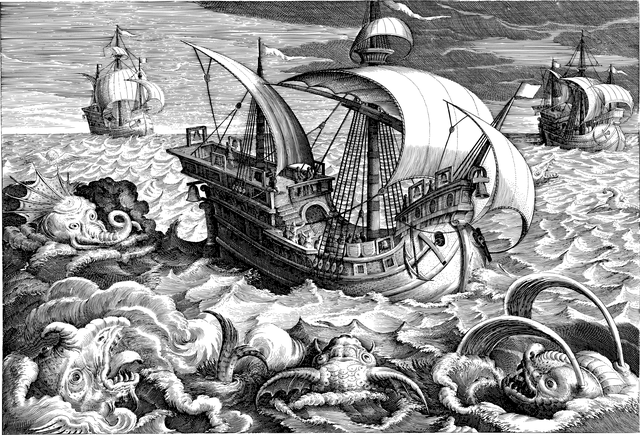 Posted at 09:41h in Races by Stav Saristavros 0 Comments
0 Likes

Coastal waters are dominated by this aquatic race, who hunt and pillage without mercy. They get frenzied by the smell of blood in the water, but don’t think they’ll stop at the shoreline- they WILL come up on land and give you a real run for your money!

How do you pronounce Sahuagin?

Let’s clear this up right away so your mind gets a head start on pronouncing it right before your mouth has to: If you’re spelling it phonetically, it would be “Sah-who-ah-gin” and the “g” is like in “give”.

Sah WHO ah gin. It’s okay, we’ve all been there.

Any time you’re wondering how to pronounce something, check out using the IPA (International Phonetic Alphabet) to spell it out, and then copy-paste it into this reader. If you want to hear how sahuagin is pronounced, here you go! It’s spelled sæhuːɑːɡɪn in IPA.

Think ‘fish monster with frog limbs’ and you’re not far off. Sahuagin are often referred to as “sea devils,” because they have no compassion in them, slaughtering the crews of ships and decimating coastal villages without mercy.

They are humanoid, with webbed feet and hands, and spines and fins coming off their fishy skin. 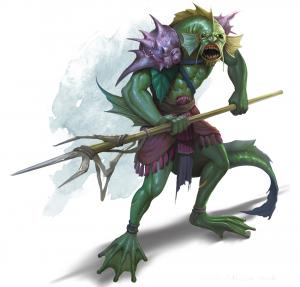 Can Sahuagin go on land? Is Sahuagin amphibious?

While they are masters of the water, they can and WILL go on land. They are bipedal and have a speed of 30, so they will keep up with you if they are using their legs for running rather than swimming. They can be out of the water for 4 hours before needing to return to the ocean.

Sahuagin can speak, but only in their own language (Sahuagin). You’d have to have a pretty unique set of circumstances for there to be a member of your party that knows that language, so plan on NOT being able to talk to them.

Do you want to geek out about language real quick? Because we’re talking about an underwater monster with its very own language. Think about how language evolves, all of the different major roots to our different tongues resulting in vastly different approaches to communication.

Even our own English has its own set of idiosyncrasies which we take for granted come naturally to us, but infuriate people who learn it as their second/third/fourth language.

Some things to think about if you’re going to have a go at wrapping your head around the Sahuagin language are, starting with the most obvious, that sound travels differently underwater.

How might Sahuagin language sound under the waves? If they’re far away, vs if they are close? Go have a bath and make noises; see what vowels and consonants you can actually still make while you’re underwater, because, spoiler alert, it’s not as many as when you’re surfaced!

So do the Sahuagin have language that works for both? Or do they change depending on if they’re submerged or on dry land?

They’re smart, and they will be communicating to coordinate their fight!

The most likely situation is that you’re not going to be able to talk to them, so plan on using the universal language: battle.

Where is Sahuagin from?

The origin story of the Sahuagin has changed over the years across the different editions of D&D.

There has been a lot of speculation about the origins of sahuagin. It’s been suggested that they’re the descendents of drow who adapted to life in the sea. Another possibility is that they might be descendants of the lost civilization of the Sinking Isle near the Sea Barons.

Some sages have noted that in their longevity and their affinity to songs make it seem like they share more in common with elves than with humans; there may be a common ancestor between elves and whatever land-bound race spawned these devil-men of the deep.

The sahuagin themselves have no myths of a time when they did not live underwater, so this is all conjecture of scholars in their ivory towers.

It’s safe to say that they come from the ocean depths.

Sahuagin are a predatory, piscine (fish-like) race that ventures from the ocean’s black depths to hunt the creatures in the shallows and on the shore.

While they dwell in the deepest trenches of the ocean, sahuagin view the entire aquatic realm as theirs to rule, and the creatures in it as fair game for their hunting parties.

The self-styled rulers of these sahuagin ocean domains are massive mutant males that grow second sets of arms. They are terrible foes in battle, and all sahuagin bow down before these powerful barons.

So I guess you could say that they worship themselves, or at least the most powerful among them are worshiped.

Sahuagin are driven into a frenzy by the smell of fresh blood. As worshipers of Sekolah, they also have a special kinship with sharks, which they train as attack animals. Wait what? Yes, trained attack sharks.

Even untrained sharks recognize sahuagin as allies and don’t prey on them. So maybe don’t be in the water if you’re fighting sahuagin, because you’re also then on the wrong side of SHARKS YOU GUYS GET OUT OF THE WATER.

The sahuagin have also made enemies in their time. They  might control the entire oceans if not for the presence of their mortal enemies: the aquatic elves.

Wars between the two races have raged for centuries across the coasts and seas of the world, disrupting maritime trade and drawing other races into the bloody conflict.

So intense is sahuagin hatred for the aquatic elves that the sea devils have tailored their combat techniques to their ancient foes.

A sahuagin born near enough to an aquatic elf community can enter the world as a malenti, which is a sahuagin that physically resembles an aquatic elf in every way. They then send this malenti as a spy into the aquatic elf society.

Spies and assassins lurking in their midst, the aquatic elves are disrupted on a very base level. The mere shadow of the malenti threat incites paranoia and suspicion among aquatic elves, whose resilience is weakened as the prelude to an actual sahuagin invasion.

Blood Frenzy: The sahuagin has advantage on melee attack rolls against any creature that doesn’t have all its hit points.

Because this gives them advantage on attacks against any opponent who’s taken damage already, they’ll press this advantage, continuing to attack any enemy they’ve bloodied rather than switch targets, even if it’s more convenient.

Limited Amphibiousness: The sahuagin can breathe air and water, but it needs to be submerged at least once every 4 hours to avoid suffocating.

4 hours is a long time, so while you’re fighting sahuagin don’t count on them needing to retreat to get back to water unless you’re well away from the surf!

Shark Telepathy: The sahuagin can magically command any shark within 120 feet of it, using a limited telepathy. Any sharks fighting alongside them will show the same intelligence and discipline that they sahuagin themselves possess, which, if you look at their ability scores, is fairly decent!

Sahuagin, and the sharks who fight with them, are not brainless monsters; do not underestimate their cunning. 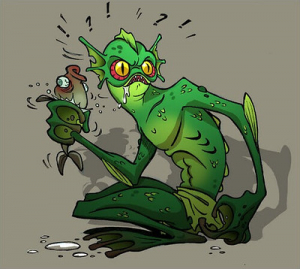 If you have the pleasure/misfortune of encountering sahuagin, try and stay out of the water, and remember that they will fixate on anyone who’s not at full HP!

If you are in the water, it might be worth thinking about how Dominate Beast might work when more than one person is trying to control a shark… *Jaws theme music plays*