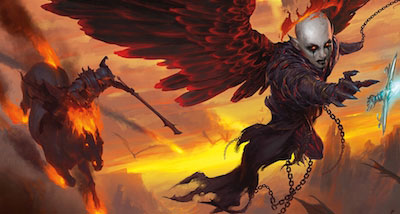 Posted at 05:06h in Skills by Stav Saristavros 0 Comments
0 Likes

A pre-made campaign D&D from Wizards of the Coast, Descent into Avernus spans five chapters that will take you into a completely different flavour of D&D!

How do you pronounce avernus? What does avernus mean?

Pretty much say it how it looks! Put a bit of emphasis on the second syllable and you’re good to go: a-VER-nus. Avernus is the first layer of the Nine Hells of Baator.

It’s the most likely beachhead for any attack by devil-kind, where they will come through and cause problems for the rest of, you know, everything that isn’t a layer of the Nine Hells.

What is in descent to avernus?

Tons of monsters, especially devils and demons, as well as some campaign-specific unique monsters, NPCs, and epic set pieces, await you in this action packed D&D adventure. “Baldur’s Gate: Descent Into Avernus” is a hardcover adventure from Dungeons & Dragons’ 5th edition.

It’s 256 pages long, and is classic epic D&D, albeit with quite the different feel from what D&D players might be used to. This is a battle that spans across multiple planes of existence and pits you and your party against archdevils and even gods.

The adventure takes you from level 1 to level 13 and beyond, and might be a great way to mix it up for your group, depending on how everyone takes to the very different take on D&D.

The official blurb from Wizards reads:

Forge Your Fate in Hellfire!

Diabolical dangers await in this adventure for the world’s greatest role-playing game.

Welcome to Baldur’s Gate, a city of ambition and corruption. You’ve just started your adventuring career, but already find yourself embroiled in a plot that sprawls from the shadows of Baldur’s Gate to the front lines of the planes-spanning Blood War!

Do you have what it takes to turn infernal war machines and nefarious contracts against the archdevil Zariel and her diabolical hordes? And can you ever hope to find your way home safely when pitted against the infinite evils of the Nine Hells?

This heroic Dungeons & Dragons adventure book takes players from levels 1 to 13 as they journey through Baldur’s Gate and into Avernus, the first layer of the Nine Hells.

Baldur’s Gate is among the most iconic locations in fantasy culture. A mist-cloaked metropolis on the Sword Coast, it’s a place of history and a home to heroes.

The book introduces the infernal war machines to fifth edition D&D—battle-ready vehicles, which you can customize as you blast off into the Blood War.

Dungeon Masters will entice their heroes with devils’ deals, designed to lure adventurers with the ultimate temptations of power and treasure. 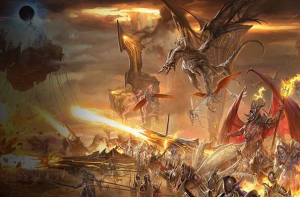 How is descent into avernus?

Reviews are mixed. Overall it is a huge adventure that is very well flushed out with everything you need to have an epic time. But if you go into it looking for classic D&D hack’n’slash, you’re in for a surprise.

You know Mad Max? Yeah, think that, but in hell, and you gotta roll to witness someone.

How long does it take to finish descent into avernus?

It really does vary depending on your group! But this is definitely a long one as far as bang-for-buck goes. Weekly sessions at 3-6 hours will last you 4-6 months, longer if your party really takes its time!

Pacing is such a tricky thing, as any DM will tell you.

The skill involved in reading the vibe of the party, what’s going on in the players’ lives that might contribute to impacting your D&D nights, knowing when to hold a 2 hour night -vs- when to have an epic 6 hour all day adventure, it’s all factoring in to how many sessions over how many months you will take to play though this campaign.

How many chapters are in descent into avernus? Is Baldur’s Gate in avernus?

There are five chapters. And as long as it is, only one chapter takes place in the walled city of Baldur’s Gate.

More chiefly the fate of another city, Elturel, is the main focus of most of the adventure, and you’ll have to head into Avernus in the Nine Hells to save it.

This all does still tie into Baldur’s Gate because it will fall unless the evil plan of archdevil Zariel is thwarted… But other than that and the first chapter, it’s not very Baldur’s Gate heavy. You’ll be leaving pretty quickly from the city to Candlekeep.

Eventually your adventure takes you to Elturel, a nearby city that has fallen into the Nine Hells and is anchored there by humongous chains.

It will be pulled down to Avernus and become a permanent fixture there, where it will likely be utterly destroyed in the raging Blood War between devils and demons.

And that’s where the adventure is, in Avernus itself, a level of hell, where you travel around in an infernal war machine (WITNESS ME!!!), fighting devils and monsters while you seek the Sword of Zariel.

How many players is descent to avernus?

However many players you want to run this campaign with seems to work within the standard D&D limits (so, 4-6 is best!)

While this might not be the best campaign for someone brand new to D&D, it is both friendly to new players and goes a long way to helping the DM run it. The art direction in the book is excellent; everything is gorgeous.

The landscapes are hellish, the artwork of devils and demons and NPCs is vibrant and well done. It’s a horrific nightmare setting though, so be aware this is not for children.

The in-book dungeon maps (and why not supplement them with some extras?) look good and are simple enough to read at a glance, which is helpful to both player and DM in a book this dense.

The book’s general layout is also very considerate of the DM. In previous 5e adventures, all NPC and monster stats were in the back of the book in a single appendix, and you’d have to flip back there for reference when you needed them.

For Avernus, monster stats that appear often in the book (but aren’t in the Monster Manual) are still at the back of the book, but NPC stats and monster stats are placed prominently on the page in which they appear in the text.

There’s also a guide early in the book, which tells you what chapters are good for what character levels, and a chart in each chapter that lays out which locations and quests in that chapter might be appropriate for each level.

That’s good for DMs running this as a complete campaign, but also for those who might want to pull out a specific dungeon (say, the High Hall cathedral in chapter two, which is good for 5th level characters) to play separately.

Is descent into avernus linear?

Avernus does go ‘beginning, middle, end’ linearly within the five chapters, but there are many ways to get to the end. How your character interacts with others, and the choices you make, will dictate your ending.

You might not realize it until later that something you chose to do is impacting the final session of your adventure. There are some critical plot points that your DM might emphasize that you’ll look back on and go ‘jeez I wonder if that’s going to come back to haunt me’…

Is descent into avernus worth it?

Have a chat with your D&D group and look at the flavor of this campaign. If you’re going to be spending this much time playing through it, you want to make sure you’re all at least interested in bombing through hell on an infernal Mad Maxx land rover. 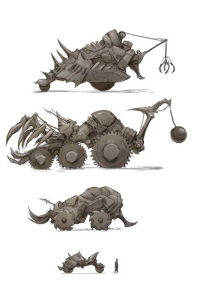 That being said, where else can you spend $50 and get months and months of fun times with your friends? This is a well put together campaign that will give you something different.

Is Baldur’s Gate Descent into Avernus canon? Is all Wizards of the Coast D&D canon?

Yes and yes! It is a stand-alone campaign, and the setting itself is not something you’re necessarily going to run into casually playing D&D, but it is put out by Wizards, and it is official D&D canon.

Oh are you really asking if you can drive up and down the Sword Coast in an infernal machine? Take it up with your DM!