Father Gorak was a  half-orc, warrior priest of Aris. He was also a member of the inner council of Sanctuary.

Gorak hailed from the province nation of the Barony of Burgs.

Being a half-orc Gorak, gravitated to a martial profession enlisting in one of the many local militias in the City of Abarests at a young age and trained as a soldier where he overcame the natural prejudice against his kind.

It didn’t take him long to find his calling. The warrior-priests of Aris at the temple of champions singled him out as a prime candidate to join the ranks of the brotherhood as a warrior acolyte.

With his formal training under the priesthood of Aris from acolyte to cleric complete, he yearned for Adventure.

Having heard of rumors of the Sanctuary he set out to find the town.

Upon finding the town he was not disappointed. Persus instantly recognizing his talent and character and offered him a position in the town where he quickly raised in its ranks through merit alone.

He accompanied the First Force on their hunt to apprehend Chief and later helped lead many missions into the Wild Moor establishing contact with the many orc tribes and even the hobgoblins of Vlak (who only respect Aris out of all the Prime Gods).

Gorak considered Sanctuary his real home although he maintained fond memories of his home in Arbarest, which gave him the opportunity to follow his path despite his race.

Gorak embodied the tenants of honor and discipline mandated by the order of Aris, abhorring mindless slaughter but never shying from a fight that was just or honorable.

It pained him to kill his kin and all too often he had been the instrument of his god’s will in dispatching orcs that preferred to savage the wilderness and attack without provocation.

For this reason, he believed in the vision of Sanctuary that gave orcs and goblins a chance to get away from the cruel nature of their societies.

Gorak was a very capable warrior, trained as a soldier as well as a priest.

He was able to call on powerful magic to enhance his already formidable strength and speed making him a true force in combat.

Gorak also possessed the power of healing as well as the ability to turn and destroy unholy forces like the undead.

Gorak preferred the use of a shield, emblazoned with the holy symbol of Aris, and a Warhammer in combat. 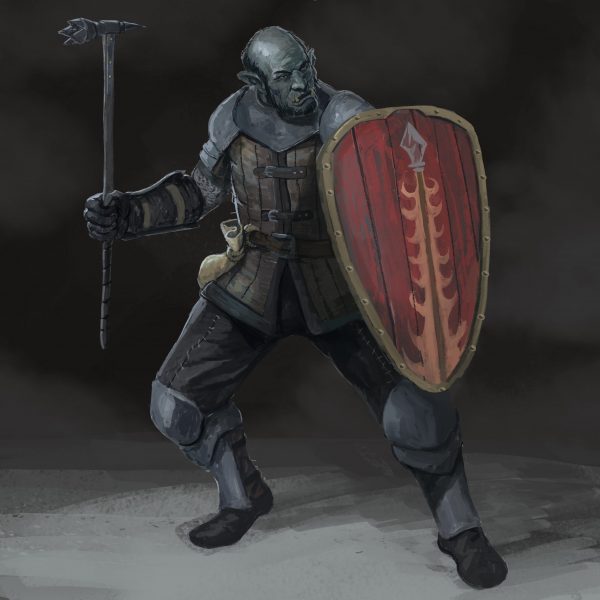