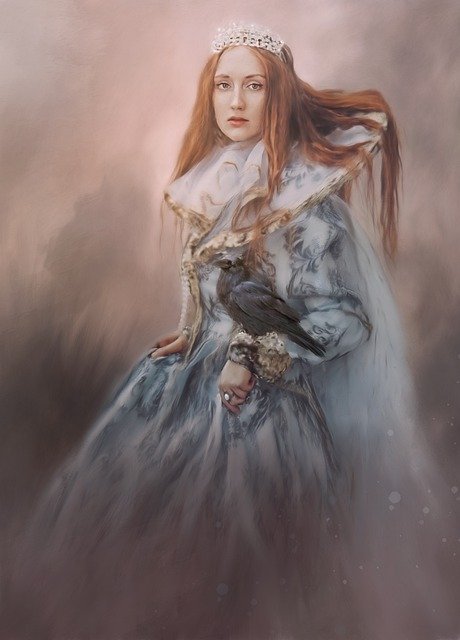 14 Sep Keeping the Life/Death Balance: Who is The Raven Queen

Posted at 18:22h in Characters by Stav Saristavros 0 Comments
2 Likes

The Raven Queen is a complex companion on your warlock’s journey, granting you alternate choices for your spells, honing you into a fine minion of her bidding strong independent warlock.

What is the Raven Queen god of?

She is the god of death, fate, and winter. The most serious of which, and the one which she will likely require your service the most to control, is that of death. She despises those who flaunt the natural order of things, and needs your help to ensure that what dies stays dead.

Who is the Raven Queen D&D?

The Raven Queen is a mysterious being who rules the Shadowfell from an ice palace of deep within that dread realm. She watches over the world, anticipating each creature’s death and ensuring that it meets its end at the proscribed time and place.

She is the lawful neutral ruler of Shadowfell, dwelling in a decayed, dark reflection of the world. Her ability to reach into the world is limited. Thus, she turns to mortal warlocks to serve her will.

As a warlock sworn to the Raven Queen, you receive visions and whispers from her in your dreams, which send you on quests and warn you of impending dangers.

What does the Raven Queen hate?

The knowledge and lore around the Raven Queen’s followers are clear that they are expected to serve her will in the world.

She concerns herself with ensuring that those fated to die pass from the world as expected, and bids her agents to defeat those who seek to cheat death through undeath or other limitations of immortality.

You might want to put that “phoenix down” style come-back-to-life ‘trick up your sleeve’ away when you take her as your patron… She particularly hates intelligent undead and expects her followers to strike them down.

Mindless undead such as skeletons and zombies are little more than stumbling automatons in her eyes, not as offensive, but still.

The Raven Queen is ethereal and does not possess a physical form due to her existence being torn apart during the backfired spell. Instead she spreads her influence through you and her other followers (but you’re her favorite, right?), while manifesting to players via symbols, premonitions, and effects when she needs to be heard.

The Raven Queen’s form has remained fragile throughout the history of D&D, and she must continue to amass mementos and trinkets to help maintain her power.

It is unknown what her overall intentions are with the things she collects, as it doesn’t appear she has any plans for them outside of using them to tether her own existence. What’s better than seven horcruxes? Like a whole pile of horcruxes all over the place. 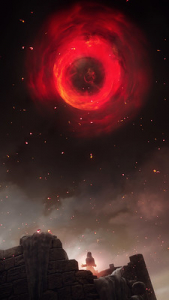 The Shadar-Kai: What lives in Shadowfell?

The shadar-kai are the most intense of the Raven Queen followers (you might be pretty intense yourself, but get a load of these guys…). They are a race of shadow fey creatures, but don’t confuse them with the drow, they aren’t into spiders- just ravens.

It’s appropriate then that they make their home in the Shadowfell. These fey took on the appearance of the Shadowfell, with gray skin, white hair, and dark shadows that somehow seem impossible.

This creepy fey creature has the grace of a dancer on the battlefield, gliding with incredible speed and agility. Their fighters wield light weapons, while their spellcasters use shadow magic to drain their opponents of life and energy.

Blending in with the natural environment of the Shadowfell, the shadar-kai excel at sneak attacks and ambushing their potential victims. If that wasn’t bad enough, the shadar-kai can also teleport short distances, reappearing with a form similar to that of a wraith.

What alignment is the Raven Queen?

Who rules the Shadowfell?

It kind of depends on who you are and who you ask. The Raven Queen is sort of the closest thing to a ruler the Shadowfell has, but it’s not like she’s “The Queen” with a parade once a year…

Although a complete account of the Raven Queen’s origins are not known there are two leading theories as to her true origins. Some believe  that she was a beloved elf queen from the Feywild who witnessed the conflict between Corellon and Lolth. Worried that the dispute might tear her people apart, she enacted a ritual to ascend to godhood in order to influence the gods and avert disaster.

Nerull was not doing the typical job of being a god of death; he wasn’t just reaping and sending souls where they had to go after they’d shuffled off their mortal coil.

No, Nerull was like “hey maybe I’ll sort of stash away these souls and use them to make me more powerful” which seems pretty rude.

Nera was a powerful queen and a killer sorcerer with huge ambitions. She didn’t appreciate the fact that this Nerull dude was ruling the way he was, and she wasn’t thrilled with being his second. Nera learned the secrets of Nerull’s necromantic techniques to raise the dead.

After a while, she was able to master the same process that Nerull used when capturing spirits. She took this newfound power and began an attack against Nerull, wanting to destroy him and take his place.

Unfortunately for her, Nerull hadn’t taught her everything and had kept a trick or two up his sleeve; he wasn’t about to go down easily. Even without his massive armies of undead, Nerull was able to hold Nera off.

To summon the strength to defeat Nerull, Nera freed the souls that Nerull had collected all these years, and with each soul she freed, they provided a small boost of power. Having to free almost all the souls gave her enough power to finally defeat Nerull and seize the mantle of the god of death.

Or so she thought…

The remaining gods watched this power grab play itself out. They saw it as an opening to wrestle some of the power away from whoever survived the encounter. While Nera was basking in the glow of her victory, the other gods made their move.

They stripped her of the title of god of the dead but instead gave her the title, and power, of the god of death. What’s the difference, you say?

Being the god of the dead meant you could trap souls of those who died, what Nerull was doing by capturing souls and locking them away for a rainy day when he planned to take over the entire multiverse.

Being the “god of death” meant that it was your job to shuttle souls between the mortal coil and the great beyond.

The other gods, who had watched in horror as Nera exploited and destroyed countless souls when she ‘freed’ them to give her enough power to defeat Nerull, gave the new goddess a choice.

She could accept the title of “the goddess of death” and be anointed as a fully-fledged deity, or they would use their collective might and pummel her into non-existence. Unable to see any other options, she accepted their offer.

Understandably Nera was none too pleased about how this had all shaken out. Her plans for becoming the god of the dead thwarted, she searched for ways to circumvent the limitations that had been placed on her by the other gods.

She dropped the name Nera and was reborn as the Raven Queen, abandoning the gray and depressing Pluton, and moving to the much more cheerful Shadowfell. 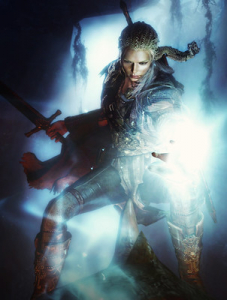 To view the entire  subclass of the unearthed arcana warlock patron of the Raven Queen please visit this WotC Link.

From Mordenkainen’s Tome of Foes, the Raven Queen is:

Throne: She rules from her Raven Throne within the Fortress of Memories, a maze like castle deep within the bleakness of the Shadowfell.

Ravens: She sends out her ravens to find interesting souls she can pluck from various planes of existence. She watches these souls try to unravel the mystery of their being – and ultimately go mad in the process.

Origin: She was once a beloved elf queen. On her fall from grace:

The Fortress of Memories: The Raven Queen collects shadows and memories, essences of the remnants of dead gods and mortals that were strewn about the Shadowfell. From these fragments, she built her twisted castle.

Again with the Ravens: Flocks of ravens darken the skies around it.  The ravens sometimes are used to deliver her cryptic messages all throughout the multiverse.

Trinkets: In the fortress are trinkets and items, memories plucked from people’s past. The shadar-kai bring them to her as gifts.

Encountering the Raven Queen: You Should Know

Who is Vecna: Vecna wants to wrest her power away. If he could gain her power over souls, Vecna could amass an army of the dead to conquer the entire Shadowfell. He frequently sends armies to attack her and his old enemy Kas.

Audience after Death: When an adventurer dies, the Raven Queen sometimes enlists them on a quest before they are resurrected by their allies.  “Some sages posit that she is using people as pawns in an inscrutable game, the rules of which are known to only her and the Lady of Pain.”

Shadowfell has many kinds of creatures and people in it, and they all speak whatever language they spoke when they got there. It’s a huge mishmash. The language of Shadowfell natives (the Shadar-kai) is called Shadar-Kai.

The Raven Queen herself speaks directly into your mind, so she speaks whatever language you understand.

To you it might be “please kill that necromancer” but to the wolf-hound she’s asking for help it might be more of a feeling she intones to them to get her desires across, maybe “bark, woof” in a way that makes sense to them. Her language is psychic and versatile.

Serve her well and you’ll be helping in the overall scheme of things, right?

I mean, death is a natural part of life, so aren’t you helping keep the natural order by following her bidding? Sure! Go nuts and have fun.