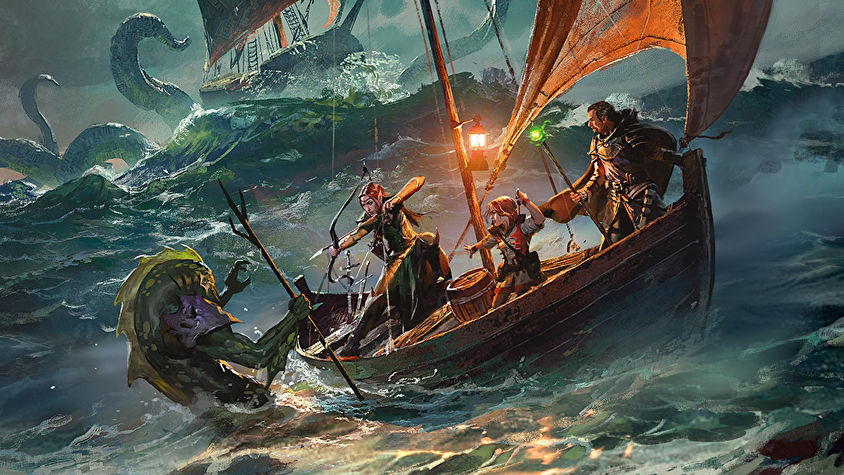 Posted at 17:55h in Races by Stav Saristavros 0 Comments
0 Likes

Is Ghosts of Saltmarsh a campaign?

Sort of; it depends on how you run it. It is not one single coherent campaign but rather a series of adventures. You can play them in sequential order, or you can pick and choose, or do them out of order.

Each adventure is it’s own campaign, but the book overall isn’t what you’d call a campaign, as there is no overarching plot or villain to string it all together.

GoS is designed to take players from level 1 to 12 if you play it front to back. It’s easy in the way that any D&D campaign can be easy; it’s balanced, but it comes down to the composition of your party and your approach to the many problems you will encounter.

Is Ghosts of Saltmarsh good for a new DM?

Overall consensus seems to be: no. It can be good for an experienced DM and party, but it’s not enough of a traditional D&D campaign to make an easy go of it for a new DM or a new set of players.

Saying that it’s for 1-5 players is beyond unhelpful, I know, but with these sorts of answers it usually is always “it depends.” The optimal number of players for a D&D campaign or adventure truly has so many factors going into it that it is impossible to say.

However, more than 5 is unwieldy, and fewer than 3 can be problematic. My sweet spot is 4, yours might be 3, or 5, or even totally fly in the face of what I just said and be smaller or larger! As long as your DM is balancing things, you can make it work.

Is Ghosts of Saltmarsh good?

Of the some 3,500 reviews on Amazon, the reception has been overwhelmingly positive. The lowest score people have given it 3 stars, was only given by 2% of the people. 4 stars: 11%.

The full five stars were given by 86% of the people leaving reviews! That’s a fairly definitive answer.

That being said, everyone has preferences and play styles, and if you’re just not a fan of the setting or you’re looking for a more overarching campaign, this might let you down. As long as you know what you’re getting into you should be exactly the target audience.

What world is Saltmarsh in?

Saltmarsh is in the D&D setting of Greyhawk, which, while no longer the default setting for 5e, is familiar to many players. However, the book does give DMs options in adapting the different locations inside the adventure to the other D&D settings! Ghosts of Saltmarsh is totally playable in the Forgotten Realms, Eberron, and Mystara! 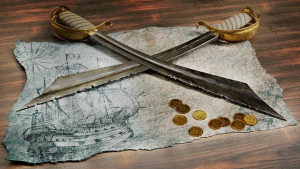 What year is Ghosts of Saltmarsh set? A Timeline of Dungeons & Dragons Greyhawk

It is set around 583-584, since the dwarven mine was established and running in the time of 5e saltmarsh.

The specifics will be for your DM to decide when it is taking place, which will determine how you are going to be dealing with the residual effects of the whole geopolitical situation.

If you want to really get into what’s going on here with deep background (“The thing people don’t realize about the Gear Wars is that it was never really about the gears at all.”), check out this timeline.

If you want to skip ahead to things which may only be immediately pertinent to Ghosts of Saltmarsh, skip to the pirate ships at the year 580.

-484: The beginning of the Baklunish-Suloise Wars.

-422: The Suloise Mages of Power call down the Invoked Devastation upon the Baklunish.

In retaliation, Baklunish spellcasters bring down the Rain of Colorless Fire upon the Suloise Imperium, transforming the empire in the Sea of Dust. Surviving Baklunish migrate north to the shores of the Drawmidj Ocean.

-216: The Foundation of the Kingdom of Aerdy.

-110: The Battle of a Fortnight’s Length. The Kingdom of Aerdy defeats Nyrondal cavalry squadrons to become the regional superpower. Aerdy thereafter became known as the Great Kingdom.

1: The Common Year was established as the system of reckoning by Grand Prince Nasran I of the Great Kingdom of Aerdy in 645 OR (1 CY), when he declared universal peace throughout his land, and took the title of Overking.

At this stage the borders of the Great Kingdom of Aerdy extend all the way to the City of Greyhawk.

320: Mixed Oerid-Baklunish nomads gradually move into and claim the steppeland east of the Yatil Mountains, pushing eastward as far as the Griffs.

355: Keolandish armies press into Ket and Veluna, but are later forced out.

356: The Kingdom of Nyrond is established when a junior branch of Aerdy House Rax-Nyrond declares itself independent of Great Kingdom rule. An invasion of northern barbarians into North Province prevents the Great Kingdom from retributive action against Nyrond.

The theocracy of the Pale and Urnst also seceded from the Great Kingdom. The Kingdom of Keoland is at its peak.

438: Keoland and Furyondy go to war, resulting in the secession of the Keolandish regions of Gran March, Bissel, and the Yeomanry.

480: Seven immense Kraken invade Oerth through a portal from the Elemental Plane of Water. The Kraken Wars wreak havoc on many underwater realms.

485: The Protectorate of Atazath is created at the nadir of the Azure Sea at the site of the portal to the Elemental Plane of Water.

561: Krulak enters the Keoish navy as a marine

565: Krulak rescues a fellow marine, Ohmic, a bronze dragonborn, when their ship, The Marshal, is sunk by pirates. Ohmic entrusts Krulak with a Bronze egg before the sea takes her life.

566: Evil forces construct a small chapel outside the village of Nulb, in the Viscounty of Verbobonc. The chapel grows to become the Temple of Elemental Evil.

576: Kirchoff hears the voice of Procan and begins his studies under the tutelage of Wellgar Brinehanded in Saltmarsh. 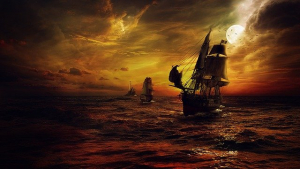 580: Evil is found to be growing again in the area surrounding the sealed Temple of Elemental Evil. Adventurers break the seals and destroy the temple once and for all. This is still pretty recent as far as things in the general public awareness goes in Ghosts of Saltmarsh.

581: Krulak retires from the Keoish navy to Saltmarsh.

582: The Greyhawk Wars begin. NiNi abdicates as chief, as it was too boring, and becomes a Pirate instead.

583: Dwarves are given a commission to establish a mine near Saltmarsh. The Dwarves drive Orcs from a cave complex. The Orcs return with trolls, attacking Saltmarsh.

Krulak leads conscripts and find themselves flanked by trolls and certain doom when Brody unleashes a mighty fireball, destroying the trolls and turning the tide of battle and saving Krulaks life who was making a last stand to buy the conscripts time to retreat.

584: The Greyhawk Wars end with the Night of Blood. Scarlet Brotherhood agents assassinate leaders across the world. The Protectorate of Atazath, a Triton territory, is attacked by Sahuagin and their Kraken master as well as land dwellers who drop devastating explosives.

The attack was rebuffed, but at great cost, the Marquis is dead, his heir twisted by the Krakens’ magic. Orin leaves the protectorate to seek allies.

Nocali awakens in a field of wheat, with the sun bearing down and no memory of his past. He wanders until he comes to the shore and then to Saltmarsh.

585: NiNi’s ship is caught in a magic storm and sinks, all hands are lost except for NiNi who is rescued by Orin. Orin brings the land dweller to the nearest shore of Saltmarsh.

The townspeople are hostile at first, but Kirchoff recognizes that Orin is a Triton, not a monster, and calms the people of Saltmarsh. 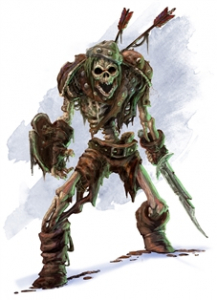 When did Ghosts of Saltmarsh release?

The hardcover book was published by Wizards of the Coast in 2019.

The Wizards of the Coast Official Blurb: Adventure on the High Seas

Explore the waves above and the fathoms below in these watery adventures for the world’s greatest roleplaying game.

Nestled on the coast of the Azure Sea is Saltmarsh, a sleepy fishing village that sits on the precipice of destruction. Smugglers guide their ships to hidden coves, willing to slit the throat of anyone foolhardy enough to cross their path.

Cruel sahuagin gather beneath the waves, plotting to sweep away coastal cities. Drowned sailors stir to unnatural life, animated by dark magic and sent forth in search of revenge.

The cult of a forbidden god extends its reach outward from a decaying port, hungry for fresh victims and willing recruits. While Saltmarsh slumbers, the evils that seek to plunder it grow stronger. Heroes must arise to keep the waves safe!

All adventures have been faithfully adapted to the fifth edition rules of Dungeons & Dragons. Furthermore, this book includes details on the port town of Saltmarsh, as well as plenty of hooks to kick-off each adventure.

Play through each story in a seafaring campaign leading characters from level 1 through level 12, or pull out sections to place in ongoing campaigns in any setting.

“The Saltmarsh series consistently ranks as one of the most popular classic D&D adventures,” said Mike Mearls, franchise creative director of D&D.

“With its ties to ocean-based adventuring, it was an obvious step to augment it with additional sea-based adventures and a robust set of rules for managing a nautical campaign.”

Hoist your sails, pull up anchor, and set a course for adventure!